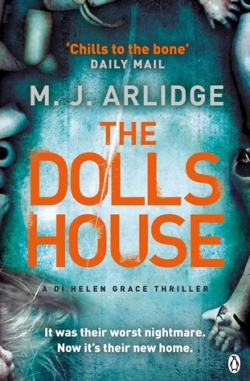 A young woman wakes up in a cold, dark cellar, with no idea how she got there or who her kidnapper is. So begins her terrible nightmare.

Nearby, the body of another young woman is discovered buried on a remote beach. But the dead girl was never reported missing – her estranged family having received regular texts from her over the years. Someone has been keeping her alive from beyond the grave.

For Detective Inspector Helen Grace it’s chilling evidence that she’s searching for a monster who is not just twisted but also clever and resourceful – a predator who’s killed before.

And as Helen struggles to understand the killer’s motivation, she begins to realize that she’s in a desperate race against time…

The Doll’s House is the third novel in the Helen Grace series. I loved the first book in the series (Eeny Meeny) and liked, but didn’t love the second book (Pop Goes the Weasel). With the third novel, I’m more in love with the series and have already reserved the fourth novel from the library!

I liked the different twist that the author put on the missing person cases, which is keeping the victim “alive” by sending out texts and tweets from their cell phones to their loved ones. How can someone be dead if they are still tweeting?!

The focus of this novel has also shifted to show more detectives within Helen’s team, instead of just having the focus being on Helen. I liked how we get to know the other team members and it demonstrates that it takes a team, not just one person, to solve a crime.

The mystery was also really well done. You learn along with Helen and her team who is responsible for the murders and it was really well paced. I kept wanting to read more and more to find out who was the killer.

4 calculators out of a potential 5. If you love mysteries that are a little darker, pick up the Helen Grace series!