Birdie Cousins has thrown herself into the details of her daughter Chess’s lavish wedding, from the floating dance floor in her Connecticut back yard to the color of the cocktail napkins. Like any mother of a bride-to-be, she is weathering the storms of excitement and chaos, tears and joy. But Birdie, a woman who prides herself on preparing for every possibility, could never have predicted the late-night phone call from Chess, abruptly announcing that she’s cancelled her engagement.

It’s only the first hint of what will be a summer of upheavals and revelations. Before the dust has even begun to settle, far worse news arrives, sending Chess into a tailspin of despair. Reluctantly taking a break from the first new romance she’s embarked on since the recent end of her 30-year marriage, Birdie circles the wagons and enlists the help of her younger daughter Tate and her own sister India. Soon all four are headed for beautiful, rustic Tuckernuck Island, off the coast of Nantucket, where their family has summered for generations. No phones, no television, no grocery store – a place without distractions where they can escape their troubles.

But throw sisters, daughters, ex-lovers, and long-kept secrets onto a remote island, and what might sound like a peaceful getaway becomes much more. Before summer has ended, dramatic truths are uncovered, old loves are rekindled, and new loves make themselves known.

Another picture to highlight my cat, Hans! Here is the link to my full review of The Island 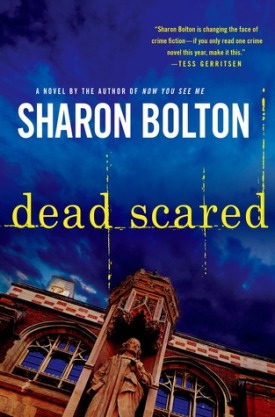 When a rash of suicides tears through Cambridge University, DI Mark Joesbury recruits DC Lacey Flint to go undercover as a student to investigate. Although each student’s death appears to be a suicide, the psychological histories, social networks, and online activities of the students involved share remarkable similarities, and the London police are not convinced that the victims acted alone.

They believe that someone might be preying on lonely and insecure students and either encouraging them to take their own lives or actually luring them to their deaths. As long as Lacey can play the role of a vulnerable young woman, she may be able to stop these deaths, but is it just a role for her? With her fragile past, is she drawing out the killers, or is she herself being drawn into a deadly game where she’s a perfect victim?

I’m liking this one so far! This is the second novel in the Lacey Flint series.

Every morning, as her husband Mike straps on his SIG Sauer and pulls on his heavy Magnum boots, Jamie Anderson tenses up. Then comes the call she has always dreaded: There’s been a shooting at police headquarters. Mike isn’t hurt, but his long-time partner is grievously injured. As weeks pass and her husband’s insomnia and disconnectedness mount, Jamie realizes he is an invisible casualty of the attack. Then the phone rings again. Another shooting but this time Mike has pulled the trigger.

But the shooting does more than just alter Jamie’s world. It’s about to change everything for two other women. Christie Simmons, Mike’s flamboyant ex, sees the tragedy as an opportunity for a second chance with Mike. And Jamie’s younger sister, Lou, must face her own losses to help the big sister who raised her. As the press descends and public cries of police brutality swell, Jamie tries desperately to hold together her family, no matter what it takes.

I really enjoy Sarah Pekkanen’s novels, so I can’t wait to read this one!

What are your WWW? Have you read The Island, Dead Scared or Things You Won’t Say?