From Jennifer Weiner, the #1 New York Times bestselling author of Who Do You Love and In Her Shoes, comes a smart, thoughtful, and timely exploration of two sisters’ lives from the 1950s to the present as they struggle to find their places—and be true to themselves—in a rapidly evolving world. Mrs. Everything is an ambitious, richly textured journey through history—and herstory—as these two sisters navigate a changing America over the course of their lives. 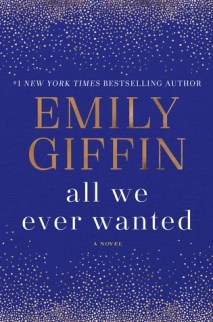 What is your top summer time read?

All of them are friends. One of them is a killer.

During the languid days of the Christmas break, a group of thirtysomething friends from Oxford meet to welcome in the New Year together, a tradition they began as students ten years ago. For this vacation, they’ve chosen an idyllic and isolated estate in the Scottish Highlands—the perfect place to get away and unwind by themselves.

They arrive on December 30th, just before a historic blizzard seals the lodge off from the outside world.

Two days later, on New Year’s Day, one of them is dead.

The trip began innocently enough: admiring the stunning if foreboding scenery, champagne in front of a crackling fire, and reminiscences about the past. But after a decade, the weight of secret resentments has grown too heavy for the group’s tenuous nostalgia to bear. Amid the boisterous revelry of New Year’s Eve, the cord holding them together snaps.

Keep your friends close, the old adage goes. But just how close is too close?

The Hunting Party gave me some serious Agatha Christie/Ruth Ware vibes. I love stories where a group of friends go off together and one is found dead and you know it had to be one of the other friends. Who was it? The Hunting Party was different because the identity of the victim was withheld as well, so you were trying to guess both identities.

What I didn’t love about The Hunting Party was that you were only getting a subset of the friends perspective. There were 9 friends, but you only heard from 3 – Miranda, Katie and Emma. When reading I thought the two identities (killer and victim) had to be from the three, because how much would it suck if it was about a person that we had heard just one story about.

I loved the drama and how everyone had their secrets. I also really enjoyed that we didn’t have to wait for 100 pages for the secrets to be revealed. An extra bonus for having the setting being in the remote Scottish Highlands. It added some creepiness to the story.

3 calculators out of a potential 5. A great concept, but fell a bit flat for me. It was a bit predictable and the characters ended up being very unlikable.

Late one night, outside Stockholm, Mikael Kohler-Frost is found wandering. Thirteen years earlier, he went missing along with his younger sister. They were long thought to have been victims of Sweden’s most notorious serial killer, Jurek Walter, now serving a life sentence in a maximum security psychiatric hospital.

Now Mikael tells the police that his sister is still alive and being held by someone he knows only as the Sandman. Years ago, Detective Inspector Joona Linna made an excruciating personal sacrifice to ensure Jurek’s capture. He is keenly aware of what this killer is capable of, and now he is certain that Jurek has an accomplice.

He knows that any chance of rescuing Mikael’s sister depends on getting Jurek to talk, and that the only agent capable of this is Inspector Saga Bauer, a twenty-seven-year-old prodigy. She will have to go under deep cover in the psychiatric ward where Jurek is imprisoned, and she will have to find a way to get to the psychopath before it’s too late–and before he gets inside her head.

The Sandman is the fourth novel in the Joona Linna series or you can be like me and just read it as a stand alone. I didn’t feel like I missed anything by skipping the first three novels.

Wow what a novel. I loved the short chapters (around 170 of them) and found that I was constantly telling myself to just read only one more chapter. I flew through the 500 page novel quicker than I thought I would. I did find it a bit hard to keep the characters names straight. There was a lot of characters and back stories in the beginning that got me a bit confused.

The novel is really dark and messed with your mind. Jurek Walter is such a complex character that scared the heck out of me. I loved the scenes with him and Saga in the psychiatric ward. I also enjoyed Joona Linna and how dedicated he was to this case since he had a personal connection to it from when he caught Jurek Walter.

4 calculators out of a potential 5. This is a novel that you don’t want to miss if you are a mystery/thriller fan!

Welcome to the most tumultuous summer of the twentieth century! It’s 1969, and for the Levin family, the times they are a-changing. Every year the children have looked forward to spending the summer at their grandmother’s historic home in downtown Nantucket: but this year Blair, the oldest sister, is marooned in Boston, pregnant with twins and unable to travel. Middle sister Kirby, a nursing student, is caught up in the thrilling vortex of civil rights protests, a passion which takes her to Martha’s Vineyard with her best friend, Mary Jo Kopechne. Only son Tiger is an infantry soldier, recently deployed to Vietnam. Thirteen-year-old Jessie suddenly feels like an only child, marooned in the house with her out-of-touch grandmother who is hiding some secrets of her own. As the summer heats up, Teddy Kennedy sinks a car in Chappaquiddick, a man flies to the moon, and Jessie experiences some sinking and flying herself, as she grows into her own body and mind.