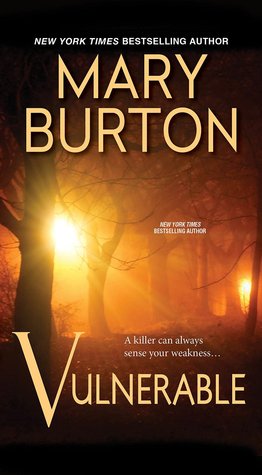 Three went in; one came out. For five years, no trace has been found of two high-school friends who went hiking in the woods near Nashville. The third teen, Amber Ryder, was discovered at the bottom of a ravine with a broken arm, head trauma–and zero memory of the horror that put her there.

What started as a cold case has become a fresh hell for forensic technician Georgia Morgan. Another woman’s body is found in the woods, and it leads to the missing teens’ remains. But while Georgia works with Amber to try and reawaken her memories, her gut tells her the worst is yet to come.

At A Killer’s Mercy

Homicide Detective Jake Bishop can’t be sure whether Amber is an expert manipulator or the killer’s next target. Either way, he’s determined to protect Georgia. Because the deeper she digs into the past, the deadlier the secrets that emerge, and a nightmare years in the making is about to come to a bloody, terrifying end…

Even though Vulnerable is the 4th novel in the Morgans of Nashville series, it can easily be read as a standalone. Each novel in the series, focuses on one of the Morgan siblings who all work in Nashville law enforcement. In this novel, it focuses on the youngest and only daughter, Georgia Morgan who is a forensic technician.

Even though, this novel is marked as a romantic suspense, there is a lot more suspense/mystery than romance. There are multiple bodies that are discovered at the same time, only they are from different time periods. The main plot, was finding out what happened to two teenagers, five years ago.

I did like the mystery and I really enjoyed Amber, one of the survivors from 5 years ago. Throughout the whole novel, I wasn’t sure if she was lying or telling the truth. Also there was some surprises through in that I didn’t see coming.

3 calculators out of a potential 5. I liked this novel more than the first novel in the series, but I still found it to be an average mystery read.

13 thoughts on “Vulnerable by Mary Burton”