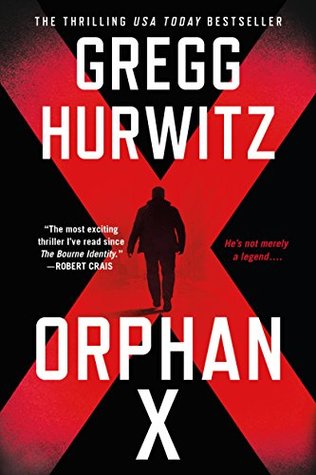 The Nowhere Man is a legendary figure spoken about only in whispers. It’s said that when he’s reached by the truly desperate and deserving, the Nowhere Man can and will do anything to protect and save them.

But he’s no legend.

Evan Smoak is a man with skills, resources, and a personal mission to help those with nowhere else to turn. He’s also a man with a dangerous past. Chosen as a child, he was raised and trained as part of the off-the-books black box Orphan program, designed to create the perfect deniable intelligence assets—i.e. assassins. He was Orphan X. Evan broke with the program, using everything he learned to disappear.

Now, however, someone is on his tail. Someone with similar skills and training. Someone who knows Orphan X. Someone who is getting closer and closer. And will exploit Evan’s weakness—his work as The Nowhere Man—to find him and eliminate him.

I’ve never read anything like Orphan X. It was super addicting right from the beginning of the novel where you learn that Evan Smoak was selected to become part of the Orphan program. I really enjoyed learning what Evan had to go through as part of the program and how he put his trained skills and principles to his current day problems.

I really enjoyed the current day storyline where Evan was being hunted down by someone who was also in the Orphan program. I had no idea who Evan could trust and how things were going to turn out. I loved each twist and turn that the novel put me through.

4 calculators out of a potential 5. Excellent novel that can be read as a standalone, but I’m going to quickly get my hands on the second novel in the series!