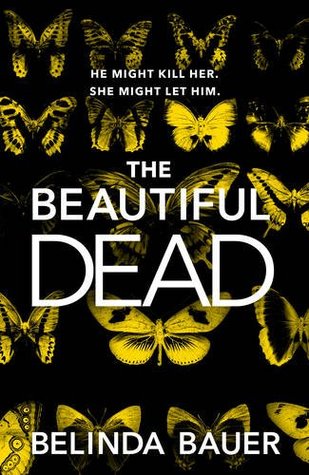 Eve Singer needs death. With her career as a TV crime reporter flagging, she’ll do anything to satisfy her ghoulish audience.

The killer needs death too. He even advertises his macabre public performances, where he hopes to show the whole world the beauty of dying.

When he contacts Eve, she welcomes the chance to be first with the news from every gory scene. Until she realizes that the killer has two obsessions.

One is public murder.

I’m not a huge fan of reporter based mysteries, but with all of the great reviews on Goodreads, I decided to give The Beautiful Dead a chance. Sadly, it did remind me of why I don’t like reporters as the main character of a mystery. I feel that with reporters, it’s about the fame and the struggle between them and other reporters to get the best story. It’s less about the victims and solving the mystery.

I did like Eve as the main character and I loved her interactions with her father who is suffering from dementia. He was easily the best part of the novel. I didn’t love the mystery/serial killer portion since I was waiting for a twist to happen, but sadly it never did.

2 calculators out of a potential 5. Wasn’t the novel that I was expecting. More of a softer mystery that I will forget about by the end of the year.

11 thoughts on “The Beautiful Dead by Belinda Bauer”