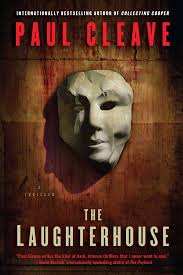 Theodore Tate never forgot his first crime scene – ten year-old Jessica Cole found dead in ‘the Laughterhouse,’ an old abandoned slaughterhouse with the ‘S’ painted over. The killer was found and arrested. Justice was served. Or was it?

Fifteen years later, a new killer arrives in Christchurch, and he has a list of people who were involved in Jessica’s murder case, one of whom is the unfortunate Dr. Stanton, a man with three young girls.

If Tate is going to help them, he has to find the connection between the killer, the Laughterhouse, and the city’s suddenly growing murder rate. And he needs to figure it out fast, because Stanton and his daughters have been kidnapped, and the doctor is being forced to make an impossible decision: which one of his daughters is to die first.

Even though I’m only 3 novels in the Theodore Tate series, I want to drop all of the other books on my to-reads and read the rest of the series. I’m really surprised that this series isn’t more well known.

Theodore Tate is a man that you either love or hate. There isn’t an in-between. He has so many inner-demons that he is battling and sometimes those demons get the better of him and he does things that cost him his friends and job. I really like Tate. It’s refreshing to get a main character that is so flawed.

This is not a series to pick up from any book. You really need to start at the beginning to understand the timelines. Plus Tate talks about previous events from the earlier novels.

The mystery isn’t amazing, but boy it is thrilling. From early on, you know who is responsible, but you have no idea what is going to happen. There are some shocking events (especially that ending) that aren’t for the lighthearted.

4 calculators out of a potential 5. Such a great series! Can’t wait to read the next novel!

It seems like an ordinary Wednesday, until the phone rings. A mysterious caller with a chilling threat. Journalist Alice Henderson hangs up, ready to dismiss it as a hoax against the newspaper. But the next Wednesday, the stalker makes another move—and it becomes clear that this is all about Alice.

Someone wants her to suffer, but for what? Her articles have made her a popular local champion—could it be her past rather than her work that’s put her life in danger? Alice is determined not to give in to fear, but with the police investigation at a dead end, her boyfriend insists on hiring private investigator Matthew Hill.

With every passing Wednesday the warnings escalate, until it’s not only Alice but also her family in the stalker’s sights. As her tormentor closes in, can Alice uncover what she’s being punished for before the terrifying threats become an unthinkable reality?

I Will Make You Pay is a slow burn mystery that still caught me off guard at the end. I wasn’t sure what to expect going into the novel and I was pleasantly surprised with the result.

Alice is a journalist and if you have read my past reviews, you know that I’m not a fan of journalists as main characters. I did like Alice even though she has made some questionable choices, both in present day and in the past. The novel also had a lot of Matthew’s view (the private investigator), which I was confused about. I’m not really sure how much of his interactions with his daughter and wife were necessary. It didn’t add anything to the story, especially to the main stalker story line.

I wish there was a bit more in terms of the stalker. The end of the novel did have the reasons for why the stalker was doing what they were doing, but I wish it was shown earlier. Also I didn’t see the creepiness factor with the stalker. I wasn’t as scared for Alice as I should of been.

3 calculators out of a potential 5. I liked it, but there was still some things that I found were lacking or could of been improved upon. I will keep my eye out for Teresa Driscoll’s future novels.

Thank you to Netgallery and Amazon Publishing UK for an ARC in exchange for my honest review.

All your friends are invited. But which of them will survive?

An addictive and twisty psychological thriller about the dark secrets that lie within a peaceful neighbourhood.

A group of old friends gather in a peaceful suburban street for a dinner party.

They are expecting a fun evening of wine, food and pleasant company. But then they start to play the game…

It’s about trust and dark secrets – it tests marriage to its limits – and none of them can begin to imagine its consequences.

Because the next day, two guests are dead and the others are trapped in a nightmare…

Top Ten Tuesday is a meme hosted by That Artsy Reader Girl, featuring a different top 10 theme each week. This week’s topic is Books On My Fall 2019 TBR. I missed this topic 2 weeks ago, but figured it is a perfect time to share my Fall TBR! 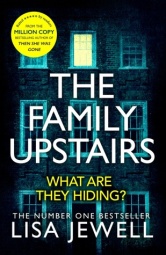 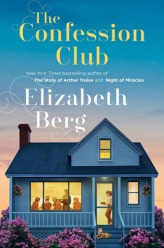 What novel do you hope to read this fall?

Two women are watching each other.

Phoebe Miller isn’t sure when the rusty car started showing up in the cul-de-sac she calls home, or why its driver would be spying on her. What could be interesting about an unhappy housewife who drowns her sorrows in ice cream and wine and barely leaves her house?

Only one knows why.

When a new family moves in across the street–the exuberant Vicki, who just might become the gossipy best friend Phoebe’s always wanted, and her handsome college-bound son, Jake, who offers companionship of a different variety–Phoebe finds her dull routine infused with the excitement she’s been missing. But with her head turned she’s no longer focused on the woman in the car. And she really should be…

Wow what a roller coaster of a novel. Just when you think you have it all figured out, Allison Dickson throws you right off. I wasn’t expecting the ending at all!

Phoebe Miller is living her life sitting by the pool eating ice cream and drinking wine. She is trying to forget that her and her husband don’t have the marriage that they thought they would have. And also trying to forget the crimes that her father has committed before he passed away.

Her life takes a turn when two things happen. First, when Phoebe notices an out of place car that is sitting outside her house for hours on end. And second, when a family moves into the house across the street. You learn a lot about Mrs. Miller, but who is the other Mrs. Miller?

I loved everything about The Other Mrs. Miller. Part one you got to understand Phoebe and see her routine thrown off. Then part two was totally unexpected. I didn’t know how the other Mrs. Miller would be introduced, but I think it was done perfectly and everything that followed was just a roller coaster. I was doubting everyone and constantly changing my mind on who was responsible.

4 calculators out of a potential 5. I flew through this one and couldn’t put it down. Set this one aside if you are going on vacation or need a read by the pool!