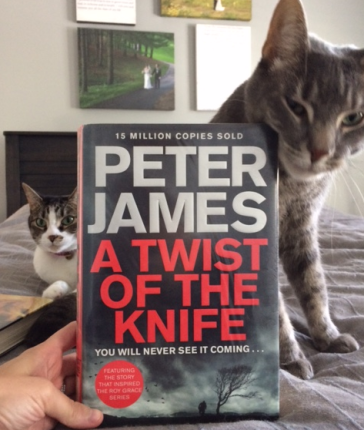 With each twist of the knife, a chilling new journey begins . . .

From a woman intent on bizarre revenge, to a restaurant critic with a morbid fear of the number thirteen; and from a man arranging a life-changing assignation, to a couple heading for a disaster-filled vacation . . .

In multi-million-copy bestselling author Peter James’ collection of short stories we first come to meet Brighton’s finest detective, Roy Grace, and read the tale that went on to inspire James’ hugely successful novel, Dead Simple. James exposes the Achilles heel of each of his characters, and makes us question how well we can trust ourselves, and one another. Each tale carries a twist that will haunt readers for days after they turn the final page . . .

Typically I’m not a fan of novels filled with short stories. I find that one or two of the stories are really good and the rest tend to be below average. Thankfully A Twist of the Knife was filled with exciting short stories that each ended with a surprising (sometimes deadly) twist.

If you are a fan of the Roy Grace series, you will be in for a treat because there are 2 Grace stories. The first is one of Roy Grace’s early cases as a detective and I really enjoyed that story and the twist that Grace figured out. The second was a Christmas story that I didn’t enjoy as much, but it was still interesting to read about.

My favourite novel by James is Dead Simple, which had an alternative ending in A Twist of the Knife. The ending of Dead Simple can’t be beat (a reason why it is one of my favourites), but it was interesting seeing a different, much shorter ending!

4 calculators out of a potential 5. This would be a perfect read if you aren’t looking for a full novel and want to read a quick story before bed.

“Lynn gripped the sides of the armchair, trying to put aside her own inner terror. ‘I can’t believe I’m thinking this, Ross. I’m not a violent person, even before Caitlin’s influence, I never even liked killing flies in my kitchen. Now I’m sitting here actually willing some stranger to die.”

The body of a teenager dredged from the seabed off the coast of Sussex is found to be missing its vital organs. Soon two more young bodies are found.

Caitlin Beckett, a fifteen-year-old in Brighton, will die if she does not receive an urgent liver transplant. When the health system threatens to let her down, Lynn, her mother, turns in panic to the internet and discovers a broker who can provide her with a black-market organ – but at a price.

As Superintendent Roy Grace investigates the recovered bodies, he unearths the trail of a gang of child traffickers operating from Eastern Europe. Soon Grace and his team will find themselves in a race against time to save the life of a young street kid, while a desperate mother will stop at nothing to save her daughter’s life…

Another novel that could of been reduced by half of it’s pages. This is the 5th novel in the Roy Grace series and I think I may need a break from the series. The first novel was amazing, but it’s gone downhill since then.

Like in the previous novels, there are a number of storylines with a lot of characters. There is Lynn and her daughter Caitlin, who is dying and is in need of a liver transplant. Then there are teenagers discovered in the water who have had some major surgery, removing organs, before they died. And then there is Roy Grace, our lead character, who needs to piece together everything and has a lot of personal issues on the side. It’s fairly easy to pick up what links up all the stories, so there isn’t a big shocker or surprise.

I like Roy, but I’m finding his story to be getting old. His wife, Sandy, disappeared and he has not heard anything from her in almost 10 years. I’m so tired of this plot as it has been dragging out over the last 5 novels. At least in this novel, there is a major clue about what happened to Sandy.

2 calculators out of a potential 5. I’m taking a break from this series.

“Abby stepped in the lift and the doors closed with a sound like a shovel smoothing gravel. She breathed in the smell of someone else’s perfume, and lemon-scented cleaning fluid. The lift jerked upwards a few inches. And now, too late to change her mind and get out, with the metal walls pressing in around her, they lunged sharply downwards. Abby was about to realize she had just made the worst mistake of her life . . . “

Amid the tragic unfolding mayhem of the morning of 9/11, failed Brighton businessman and ne’er-do-well Ronnie Wilson sees the chance of a lifetime, to shed his debts, disappear and reinvent himself in another country. Six years later, the discovery of the skeletal remains of a woman’s body in a storm drain in Brighton, leads Detective Superintendent Roy Grace on an enquiry spanning the globe, and into a desperate race against time to save the life of a woman being hunted down like an animal in the streets and alleys of Brighton.

There was so much happening during this book it was hard to keep track of all of the story lines at the beginning.

For the majority of the novel, I had no idea how these storylines were going to come together. I loved in the end how they were woven together and the connection between the characters.

I really like the main character in the series, Roy Grace, but I’m a bit tired of the disappearance of his wife, Sandy. With every book, there is a big debate if she is dead or alive that never seems to go anywhere.

4 calculators out of a potential 5. I enjoyed this 4th novel of the series, much more than the 2nd and 3rd novels. I can’t wait to read more!