In the four years since her husband’s death, midwife Sarah Brandt has become an angel of mercy in the tenements of turn-of-the-century New York. Now, Detective Sergeant Frank Malloy has taken up the task of solving the murder of Dr. Tom Brandt. But the shocking revelation he discovers may destroy Sarah—and Malloy’s hopes for any future with her.

In the 10th novel in the Gaslight mystery series, a big storyline has finally wrapped up! I’m glad that the author didn’t drag this story out too much, although you can argue that 10 books is way too long to address a major murder mystery.

Way back in book 1, we were introduced to Sarah Brandt, who is a midwife in NYC at the turn of the century. She gets involved with a murder and then meets Frank Malloy, a detective sergeant. Sarah was recently widowed and had no idea the details surrounding her husband’s death.

Now in book 10, I’m so happy that Thompson dedicated a whole novel in solving Tom Brandt’s death. It took a bit to get into the novel, but I was hooked from the halfway point onward. I really liked how minor characters got more involved and of course I was shocked by the ending!

4 calculators out of a potential 5. If you haven’t heard of this series, I would highly recommend it. I love learning little facts about the 1890s!

Like most women, Elizabeth Miles assumes many roles; unlike most, hers have made her a woman on the run. Living on the edge of society, Elizabeth uses her guile to relieve so-called respectable men of their ill-gotten gains. But brutal and greedy entrepreneur Oscar Thornton is out for blood. He’s lost a great deal of money and is not going to forgive a woman for outwitting him. With his thugs hot on her trail, Elizabeth seizes the moment to blend in with a group of women who have an agenda of their own.

She never expects to like or understand these privileged women, but she soon comes to respect their intentions, forming an unlikely bond with the wealthy matriarch of the group whose son Gideon is the rarest of species—an honest man in a dishonest world. She knows she’s playing a risky game, and her deception could be revealed at any moment, possibly even by sharp-eyed Gideon. Nor has she been forgotten by Thornton, who’s biding his time within this gilded orbit, waiting to strike. Elizabeth must draw on her wits and every last ounce of courage she possesses to keep her new life from being cut short by this vicious shadow from her past.

I’m disappointed with City of Lies. I love Thompson’s Gaslight mystery series, but this new series just never felt right to me. It also took me way too long to read this. This 300 page novel felt so long and it felt like a struggle whenever I was reading it.

I liked the setting of the novel – 1917 in Washington, DC. Women are lining up in front of the White House to fight for their right to vote. At times, I felt that it was 1917, but other times I felt that the setting could of been at any time.

I was hoping for more of a mystery, but it was more of a romance and a con plot. I enjoyed aspects of the con, but I felt that it got lost with all of the other storylines going on. I also didn’t enjoy the main character Elizabeth. It just felt that things were a bit too easy for her and everyone was falling in love with her (that gets a bit tiresome).

2 calculators out of a potential 5. Not a fan and won’t be continuing with the series. 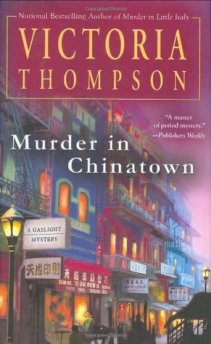 Sarah Brandt has made her uneasy way to Chinatown to deliver a baby. There she meets a group of Irish women who, completely alone at Ellis Island, married Chinese men in the same predicament. But even as a new century dawns, New Yorkers still cling to their own kind, scorning children of mixed races.

When the new mother’s half-Chinese, half-Irish niece goes missing, Sarah knows that alerting the police will accomplish nothing, and seeks the one person she can turn to-Detective Sergeant Malloy.

And when the missing girl is found dead in a Chinatown alley, Sarah and Malloy have ample suspects in her murder-from both sides of Canal Street.

Murder in Chinatown is the 9th novel in the Gaslight mystery series and I love this series! I love reading about what adventures and murders Sarah gets herself involved with. Also I have never read anything about the turn of the century so I love the historical aspect.

It’s interesting to make comparisons between today’s society and what society was like over 100 years ago. Sadly there are things that haven’t changed. In this novel, Sarah is open and honest about what the situation is like for the Chinese who have immigrated to the US. Only Chinese men are allowed to come over to work in the United States. They are treated as second class citizens even though in some situations they are making good money, even better than white immigrants.

Because of the lack of Chinese women, Chinese men are marrying Irish women and having mixed babies. These children are not treated as Irish or Chinese since neither society will accept them as they are not fully 100% of a certain race.

Thankfully we have Sarah. Even though she is well aware of the stereotypes, she ignores them and helps deliver babies regardless of what the situation is. In this novel, a Irish woman is giving birth and after the birth, an Irish-Chinese young woman goes missing and eventually is found dead. Obviously there is a lot of tension between the Irish and the Chinese, each pointing to the other as the murderer.

I enjoyed the mystery more than previous novels since I didn’t guess who the killer was. Thompson did a great job throwing in a number of suspects who each had a reason for killing the young woman.

4 calculators out of a potential 5. If you haven’t heard of this series, I would highly recommend it! 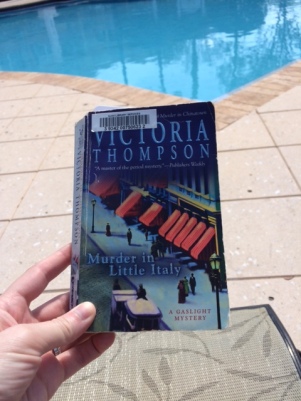 For those who have never heard of the Gaslight Mystery series before, I would highly recommend it! I remember going in thinking that it was a cozy mystery, but oh man it’s not considered a cozy. There are some very mature themes in the novels and nothing is off limits.

The Gaslight series takes place at the turn of the century in New York City and follows midwife, Sarah Brandt, and police detective, Frank Malloy. In the 8th novel, a young married woman gives birth, but when Sarah goes in to check on her the next day, she is found dead. Now there is a fight between the in-laws on who gets the baby, which sparks a bigger Italian vs Irish rivalry which leads to another death.

I really enjoy this series and I always feel so cozy and warm when I can re-connect with Sarah and Malloy. I love the two of them together and really want them to get together!!

I found that this book was lacking compared to the other books in the series. I think it was because I guessed who the killer was right away. There was also not many subplots to get away from the main storyline. I can’t believe Malloy’s mother and son weren’t even in the novel!

3 calculators out of a potential 5. I’m still loving the series, but wished that there was more non-murder subplots that include Sarah and Malloy. I can’t wait to read the next book and I’m hoping that it will be focusing on Sarah’s late husband!